The first Deserter’s Monument is situated in Vienna

On October 24, 2014, the Memorial to deserters and other victims of Nazi military justice was dedicated in a state ceremony on Ballhausplatz in the heart of Vienna.

During the Second World War Nazi military justice handed out more than 30,000 death sentences: against soldiers, prisoners of war and civilians, in particular from the regions occupied by the German Wehrmacht all over Europe. Most of the death sentences were passed against deserters and “Wehrkraftzersetzer” (subverters of the war effort). Many thousands of other soldiers died at the front after being sentenced by the military courts to serve in “penal/probation battalions”.

The actions punished, ways of life and biographical backgrounds of those persecuted varied widely. Political opponents of Nazism faced the military courts just as much as people who were looking for individual freedom for very different reasons. Any form of resistance or, for example, support for deserters by civilian helpers was regarded as a political crime and was thus punished with the greatest severity.

After the end of the war, Austrian society met the survivors of this persecution with rejection and hostility. Because in Austria for a long time the myth continued that in 1938 it was made the “first victim” of German war policy; yet the service of Austrian soldiers in the Wehrmacht was considered to be the fulfillment of duty or even heroic.

Inspired by historic research, it was only after the turn of the century that the recognition prevailed that Nazi military justice had put itself unconditionally at the service of a criminal war. In 2009, with the votes of the Social Democrats, the People’s Party and the Green Party, Austria’s National Assembly rehabilitated the victims of the persecution by the Wehrmacht courts, and in 2010 the City of Vienna decided to erect a monument to the victims of Nazi military justice.

The sculpture by Olaf Nicolai on this central location of the Austrian Republic takes up the classical elements of a memorial, the “pedestal” and the “inscription”. Yet it arranges these completely differently than in traditional war memorials. An outsized, lying “X” constitutes the three-step pedestal, on the third level of which the inscription is embedded. The text is only readable from above and quotes a poem by the Scottish artist Ian Hamilton Finlay (1925–2006), who was friends with important representatives of the language-critical and experimental Viennese artists’ scene. The interplay between pedestal and inscription stages the situation of the individual in and toward the social order and power relations. Threatened by anonymization and extinction, which turn him into an “X” in a file, his or her position is nonetheless central. The sculpture demonstrates respect for all those who take their own decision, defy heteronomy and through their independent action position themselves against the prevailing system.

Olaf Nicolai grew up in Karl-Marx-Stadt, what is today Chemnitz. Between 1983 and 1988 he pursued a degree in German studies and went on to earn his doctorate at the University Leipzig (entitled “Gestures between Expression and Calculation. On the Poetics of the Vienna Group”). Since the beginning of the 1990s, he has presented his works both in group and solo exhibitions at the most important locations of the contemporary art scene. 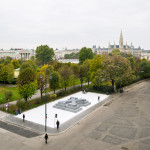 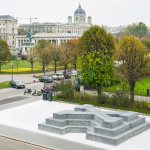 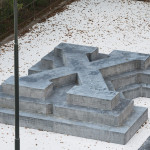 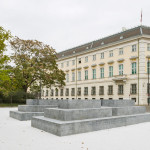 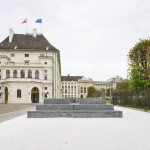 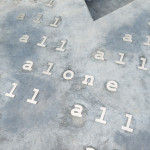 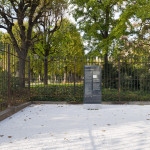 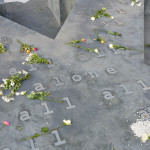